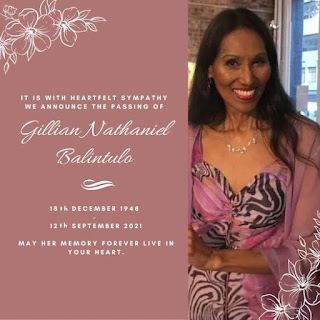 December 18, 1948 - September 12, 2021
...Originally from Belmont, Balintulo was, for many years, an in-demand music teacher. However, she is best known for her collaborations with All Stars in the 1980s.
In 1987, she was invited to accompany the-then Catelli All Stars in its performance of Gershwin’s concerto, Rhapsody in Blue for the band’s Classical Jewels VI production.
The following year she was appointed musical director and conductor after the retirement of Jerry Jemmott and led the band in its performances of Tune of Choice and the test piece in that year’s Steelband Festival.....
Relevant Content
Conducted by Gillian Balintulo and performed by Trinidad All Stars at Music Festival 1988

Popular posts from this blog 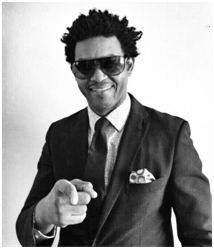 Breaking News To: All Member Bands of Pan Trinbago Members of the National Community Date: November 5, 2021 Subject: End of “TERM OF OFFICE” I am writing to officially announce that my term of office as the constitutionally elected External Relations Officer of Pan Trinbago has ended effective October 27, 2021. When I was elected as the External Relations Officer Pan Trinbago, it was for the term October 28, 2018 – October 27, 2021. The election for that term was in compliance with the constitution of the organisation, and it was expected that all executive members elected at that time would either seek re-election in 2021, or leave office on time as required by the constitution. It is my understanding that the outgoing President Beverly Ramsey Moore and six members of the outgoing executive have gone rogue and refused to leave office. This follows an earlier announcement by the Secretary Denise Hernandez dated September 20, 2021 that the executive agreed that the constitutionally du
Read more

MEMBERS OF THE NATIONAL MEDIA OF TRINIDAD AND TOBAGO PRESS CONFERENCE – Newtown Playboys Pan Theatre Hosted by PAN TRINBAGO MEMBER BANDS November 9, 2021 Our purpose today is to present a balanced view of the current circumstances within Pan Trinbago, and to highlight acts of violations of Pan Trinbago’s Constitution committed by the Beverley Ramsey Moore led Executive during their term of office. The entire constitution document is available for review at  https://www.pantrinbago.co.tt/Overview/TheConstitution.aspx . Presenting below are excerpts of current and relevant circumstances affecting the operation of Pan Trinbago. Pan Trinbago Constitution dated 1986 states: ARTICLE 7 – STRUCTURE - The organizational structure of the Association shall be composed of: a. The General Body b. The Central Executive Committee c. Regional Committees PART A. THE GENERAL BODY i. The General Body shall consist of all classes of members of the Association. ii. Each member steelband shall elect two (
Read more

Concert of a Jamaica steel band in Northern Germany - 1958 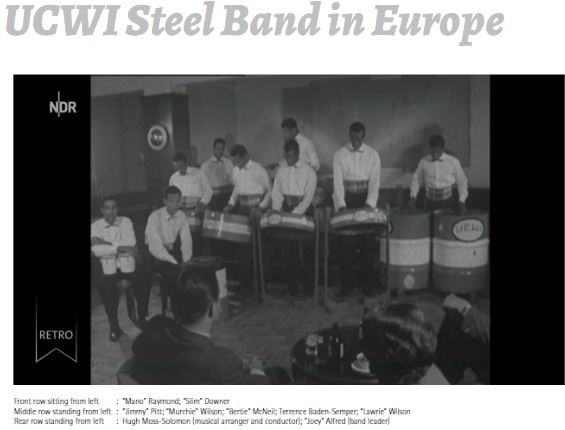 Drumming on old oil barrels - which in Germany is child's play at best, has been professionalized in the Caribbean with steel drums. A Jamaica steel band shows their repertoire on a European tour. The band leader explains the unusual instrumentation. December 31, 1958 ∙ Nordschau ∙ NDR Related content  The History of Steelband in Jamaica
Read more